Does God get tired? By Jason Craft 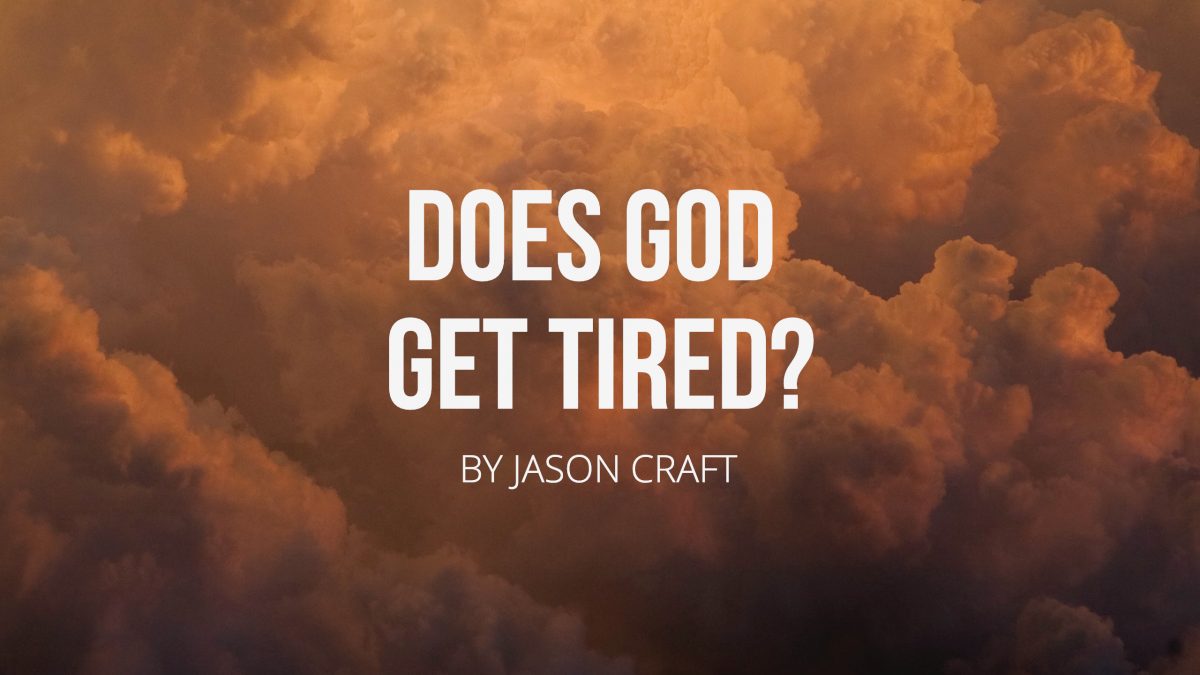 Scripture has a lot to say about the emotions of God. We see in scripture there have been moments when God becomes weary of His dealings with a wayward mankind. He gets tired. How does it happen? And what can we learn from it?

God can get irritated... He can get fed up… He can be angry … and there is one thing that can even make Him weary… Yes, you read those things correctly. Not exactly the descriptions we might express in church.

In perhaps one of the most emotionally charged passages of scripture, we find God fuming. He doesn’t hold back from annoyance, even hatred, toward His people’s actions. With biting sarcasm, God condemns Israel’s “meaningless offerings”, calling their incense “detestable”. God breathes so much fire on their fasting and meetings that He concludes “they are all sinful and false”.

In a seemingly contradictory statement to God’s patience and love, Isaiah concludes, God “is weary”.

This stunning moment tells us much about God.

Physically tired? No. Tired of dealing with His people? Yes.

But, before we continue, let’s clarify a few things.

First, we know God doesn’t get physically tired. In Isaiah 40:28, it says, “have you not known? Have you not heard? The everlasting God, the Lord, The Creator of the ends of the earth, Neither faints nor is weary.”

This is different from chapter 1 where Isaiah is describing God’s emotions. He had lost all patience. We know God is extremely patient. He is love, and He cannot change. Yet, there are things that cause His patience to run out.

What makes this happen? We know from scripture about one thing.

The Israelites were meticulous to carry out the traditions handed down to them. They performed sacrifices, offerings and holy celebrations. But their heart was far removed from God even while they performed with perfection.

In short, they gave themselves to ritual without relationship. They executed the plan to perfection, but lost the intended meaning in the process. They followed the rules, but their hearts were not in it.

We can learn from their foolish example. In fact, we could simplify this scenario and create a new formula for understanding what had gone wrong. Ritual without relationship equals religion.

Is all religion bad?

Let’s dive deeper into the concept of religion. The definition of religion is any activity pursued with devotion.

Jesus described the pharisees of his day as hypocrites, vipers, fools, blind guides, and sons of murderers (see Matthew 23).

There is only one pure form of religion that the Bible addresses. In James chapter 1 it says “Religion that God our Father accepts as pure and faultless is this: to look after orphans and widows in their distress and to keep oneself from being polluted by the world.” (NIV)

This is a pure form of religion. But, the key to understanding this “pure religion” is found in the verse before verse 26.

Verse 25 says “those who consider themselves religious and yet do not keep a tight rein on their tongues deceive themselves, and their religion is worthless.” (NIV)

God doesn’t want your hands. He wants your heart. Your motive for what you do is just as important as what you do.

Paul summarizes this well in 1 Corinthians 13:3. “If I give away all I have, and if I deliver up my body to be burned, but have not love, I gain nothing.” (ESV)

In Romans 5:5, Paul tells us that “God’s love has been poured out into our hearts through the Holy Spirit, who has been given to us.”

From this verse, we can see that it is an intimate relationship that is key to keeping ourselves in the love of God. From our relationship with the Holy Spirit, we are able to fulfill the mission He has given to us.

There is no effective religion without genuine intimacy with the Holy Spirit. He has made Himself a close partner for us. It’s with the guidance and daily cooperation of the Holy Spirit that we are able to walk in the will of God. Operating on our own will only lead to dead religion.

This is where the religious spirit shows its ugly head.

What is a Religious Spirit?

A religious spirit is a spirit that seeks to substitute religious activity for the power of God in our lives. It’s a demonic spirit that lures us into putting confidence into practice rather than a person.

The religious spirit is Satan’s answer for the Holy Spirit. It’s a shell and a fake. It wants to lock us into a form of godliness that denies the true power of God, as 2 Timothy 3:1-5 describes.

“But understand this, that in the last days there will come times of difficulty.  For people… having the appearance of godliness, but denying its power. Avoid such people.”

The religious spirit is about structure. But, the structure that is built with the spirit of religion has no true substance. Any structure needs to be filled with the substance of Heaven in order to carry out the mission of Heaven.

The religious spirit is a subtle spirit that entangles itself among many men and women in the church.

Some of the symptoms of the religious spirit are lust, fear, gluttony and anger.

For the healthy Christian, these things are immediate red flags signaling the need for repentance. But, for those under the religious spirit, these behaviors are justified as part of the will of God.

Is the Religious Spirit found in Scripture?

Examples of the religious spirit in action are found all over scripture.

One example of this is found in Luke 9:51-56 when the Samaritan Village rejects Jesus. The disciples were furious and wrathful when they saw the Samaritans reject Jesus.

Satan masquerades as an angel of light (2 Corinthians 11:14). He comes to church clothed in truths. He speaks the truth. But only truths spoken out of context, misplaced and only partially true.

Satan wants to use the Word of God against us. Remember, he used scripture when he tempted Jesus in the wilderness (Luke 4:1-12).

Characteristics of the Religious Spirit

The religious spirit lives in the church. It’s often difficult to recognize because it lives under the guise of truth.

“Knowledge puffs up, love builds up”.

The purpose of the scriptures is that we might enlarge our acquaintance with God. Doctrinal study can be a danger to spiritual life when we seek to know all the answers rather than be led directly by Him in a rich relationship.

Knowledge about God without knowledge of God can produce pride. Pride opens the door to the religious spirit.

There is a difference between self-righteousness and righteous indignation. Can you imagine being so self-righteous that you are willing to destroy an entire city? That’s not healthy.

This is how it operates. This is one of the characteristics of the religious spirit.

It is more interested in judgment than in forgiveness. It wants to see someone pay for their wrongdoing, rather than seeing someone receive grace as a free gift.

In John 5:39, the Pharisees knew and studied the scriptures, but missed their Messiah. “You study the Scriptures diligently because you think that in them you have eternal life. These are the very Scriptures that testify about me”.

Finding security in knowledge about the scriptures leads to the desire to argue about doctrine over spending time at the feet of Jesus. This is the affect of the religious spirit.

This spirit tempts you to add things to the gospel.

In Galatians 3, Paul says “who bewitched you? Did you receive the Spirit by observing the law or by believing what you heard?

It compels the belief that the more things that are done for God, the more likely salvation will be achieved.

Emotionalism and the Religious Spirit

People under the influence of the religious spirit are often repulsed by emotionalism. Michal was repulsed by David’s worship, and became barren. A critical spirit leads to spiritual barrenness.

On the other hand, some people under the influence of the religious spirit use emotionalism as a substitute for the work of the Holy Spirit. In Matthew 7:21-23, we see those who relied on manifestations over knowing Jesus Himself.

Matthew 23:5 describes those who care more about outward appearances than inward change. They love titles. If wearing a tie is a prerequisite to being respectable in a church, the religious spirit is at work.

How to repent and be set free

If you are reading this and feel convicted about being under the religious spirit, we encourage you that you are not condemned! Jesus loves you. And He is calling you into a real love for Him that is no longer based on religion, but relationship.

The Church of Ephesus heard these words in the book of Revelation (2:1-7):

“To the angel of the church in Ephesus write: These are the words of him who holds the seven stars in his right hand and walks among the seven golden lampstands:

I know your deeds, your hard work and your perseverance. I know that you cannot tolerate wicked men, that you have tested those who claim to be apostles but are not, and have found them false.

You have persevered and have endured hardships for my name, and have not grown weary.

Yet I hold this against you: You have forsaken your first love.

Remember the height from which you have fallen! Repent and do the things you did at first. If you do not repent, I will come to you and remove your lampstand from its place.

But you have this in your favor: You hate the practices of the Nicolaitans, which I also hate.

He who has an ear, let him hear what the Spirit says to the churches. To him who overcomes, I will give the right to eat from the tree of life, which is in the paradise of God.

We stand with you right now at this moment. We ask God to stir you into the love and affection of the Holy Spirit. We pray that God will change your heart from being under the influence of a religious spirit, and into the freedom of the good news of the grace of Jesus Christ. Amen!

Want to talk to a pastor or receive prayer?

We would love to pray with you. Click here to send us a prayer request. 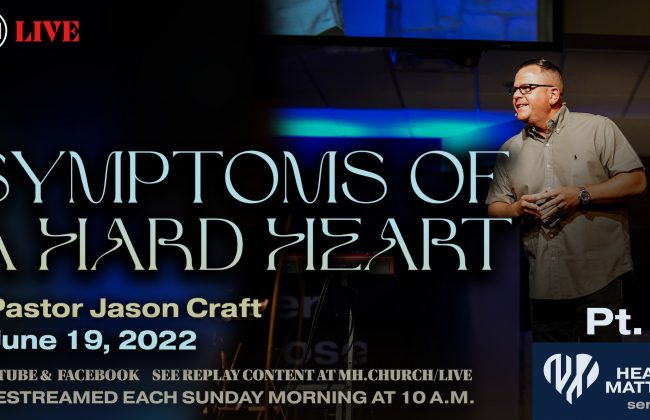 Symptoms of a Hard Heart 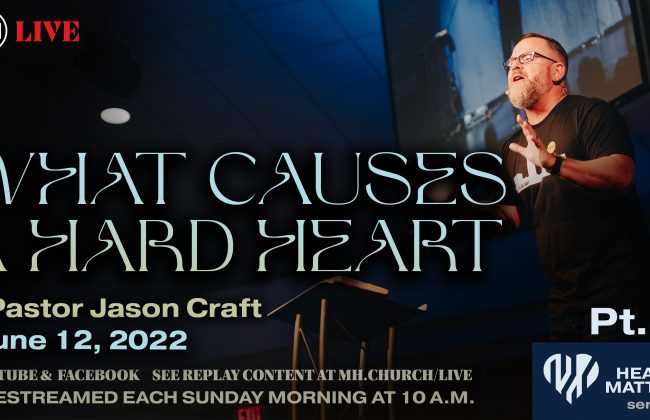 What Causes a Hard Heart? 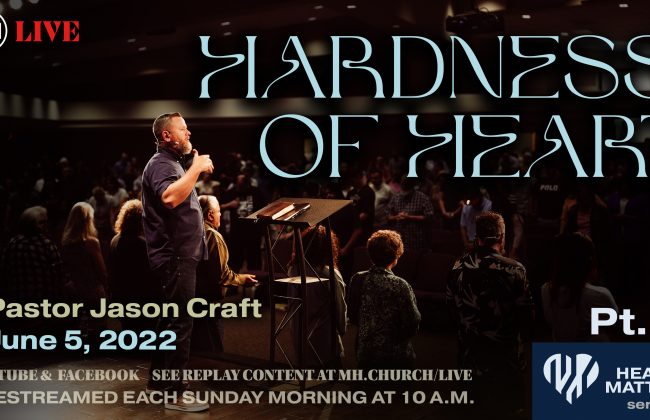